Did you always want whiter teeth and a brighter smile? No doubt that brighter teeth make you look younger and healthier. It is very important that you seek advice from a dentist before proceeding with any kind of teeth whitening process. Teeth staining can be very different in their cause and nature which teeth whitening may not necessarily be the answer.

Teeth whitening products contain Carbamide Peroxide or Hydrogen Peroxide and come in different strength. Talk to our dentists to choose what is best for you.

In-Office teeth whitening is for people who want instant whitening gratification or those who have that special event coming up that requires a bright, white smile. A hydrogen peroxide-based whitening gel is applied to the enamel of your teeth and the light is exposed to the teeth to accelerate the whitening process. This light aid in accelerating the activation of the hydrogen peroxide and it helps it penetrate the surface of the tooth. This procedure will be completed within 60-90 minutes. The in-office teeth whitening gel is the highest strength and is not available over the counter. Teeth whitening results can last anywhere from one to five years. 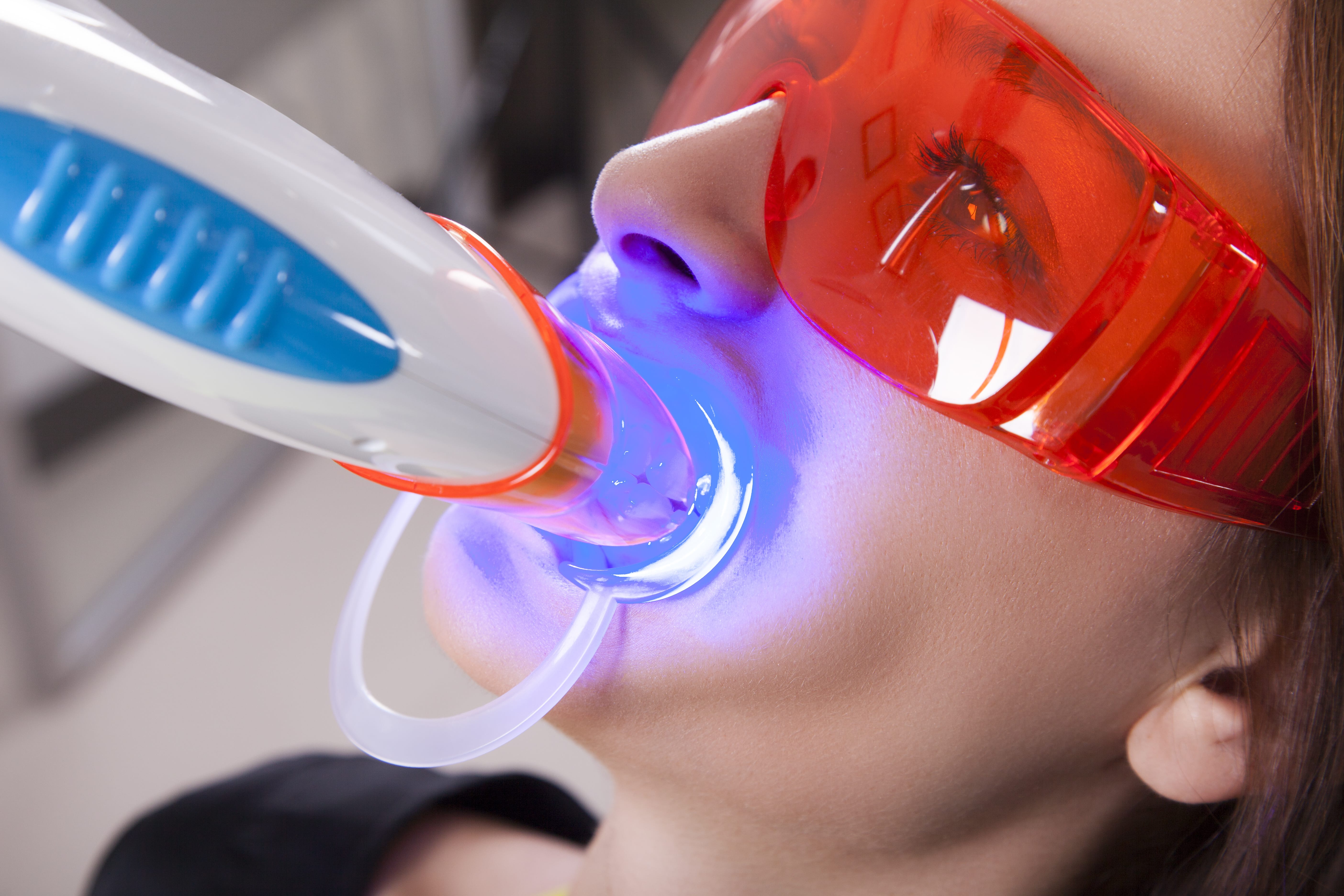 Take-home whitening gel allows you to get professional whitening results at the comfort of your own home using a safe, effective, and customized way. After the initial evaluation, your dentist will take an impression of your teeth to prepare customised bleaching trays. Your custom trays will be ready within 5 days and will be issued to you along with the appropriate bleaching kit. Your dentist will then give you a detailed instruction 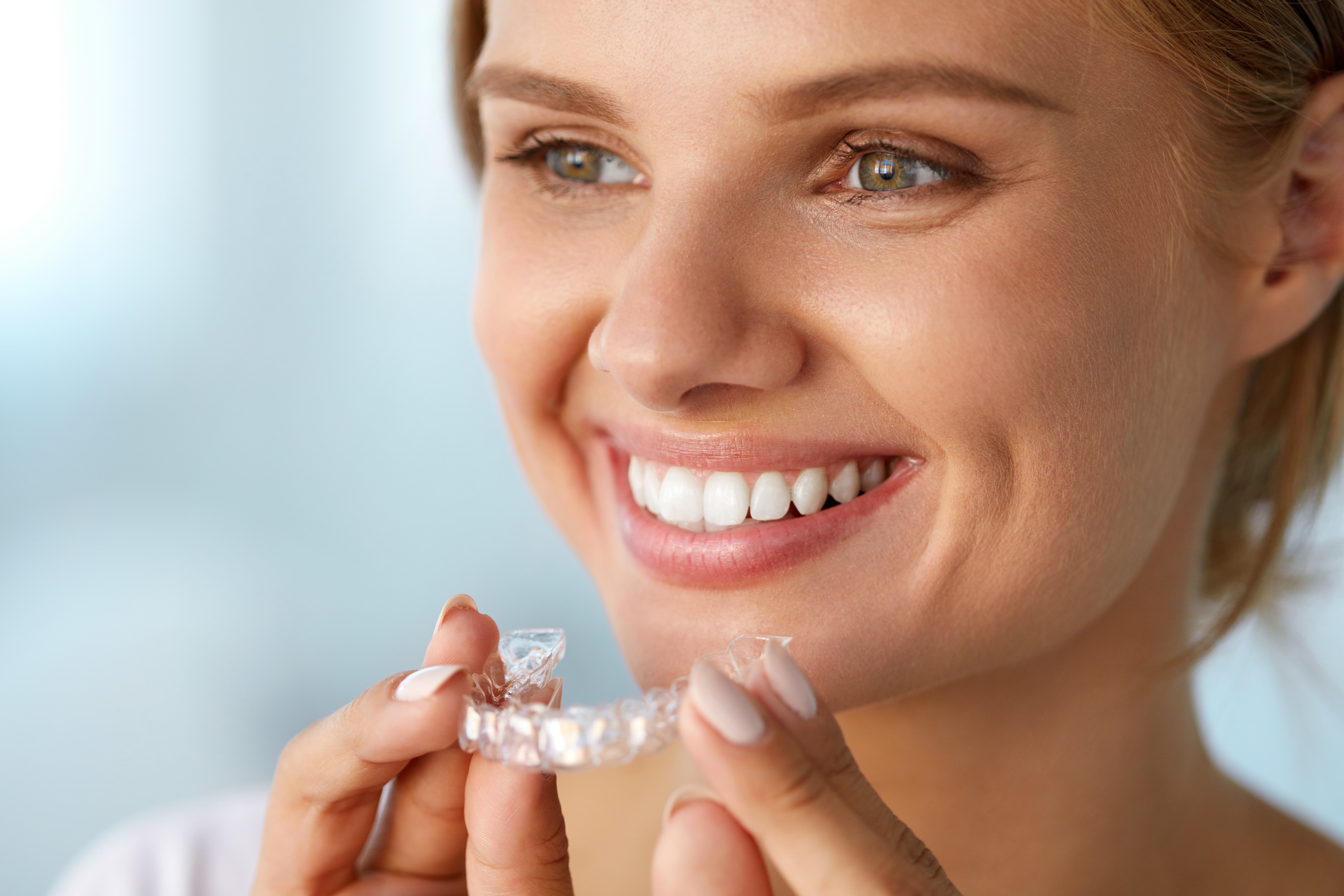 The availability and easy access to generic teeth whitening products and the at-home process is appealing to many, but the damage they can cause is irreversible. With continued use, patients may see some minor results with these whitening systems. But their easy access can also lead to overuse and long-term use may be harmful to your teeth. The consistency of over-the-counter gels is also often thinner than professional whitening gels, running between the teeth and causing painful irritation to the gums. These products are time-consuming and very inconsistent. In fact, many people give up before completing their treatments because the solutions taste horrible, get too messy and do not provide the expected results. If your teeth are crooked or rotated, you may not get the results you want. Furthermore, decay or recession can complicate matters by increasing sensitivity. In any cases, professional teeth whitening by your dentist is the safest and best option for your smile.

Under our professional supervision at Blue Tooth Dental, our whitening technique is safe for your teeth and gums and results are usually achieved within a matter of days. Professional whitening uses a stronger substance that works more effectively and in a shorter time. This means you won’t be wasting money on over the counter products and waiting around for results that may disappoint, or even not eventuate.

There is no noticeable difference in sensitivity and there is no difference in rebound after teeth whitening with hydrogen peroxide vs carbamide peroxide. Rebound is where the teeth appear lighter immediately after whitening, but then lose some brilliance after a short time has passed.  Rebound has more to do with dehydration than peroxide levels. Whitening gels like Opalescence that contain higher water content help to prevent rebound caused by dehydration.

This means that products using hydrogen peroxide have shorter wear times. However, the number of days a person will need to use either one depends not on hydrogen peroxide vs. carbamide peroxide, but on the individual’s unique needs and rate of tooth color change.

Products with carbamide peroxide have a slightly longer shelf life than those with hydrogen peroxide, although when refrigerated, all peroxide products have an increased shelf life.